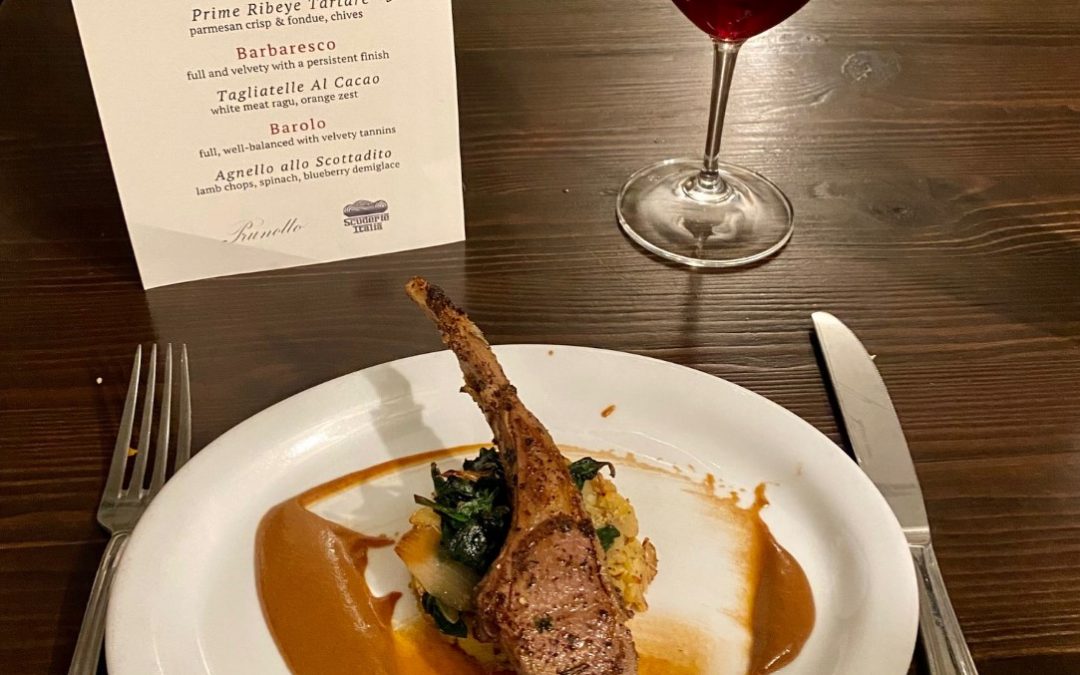 Article by Rico Cassoni with Taste of Wine & Food

When Silvio Di Silvio, Ste Michelle Wine Estates, Western Manager, invited Frank and me to try out some premier wines from Piedmont, Italy’s Prunotto Winery, the answer was easy – “Heck Yes.” Added bonuses were that the “Sip and Savor” event was at San Diego Pacific Beach’s Scuderie Italia and that Emanuele Baldi, from the winery, was onsite to narrate the dinner. Baldi provided an exceptional background on Prunotto as well as sharing information and tasting notes about the three wines poured.

Prunotto started as a winemaking co-op in 1904, that included Alfredo Prunotto, with its first harvest in 1905. Following economic hardship and World War I, the co-op fell apart and Prunotto took over. Soon after, he started exporting Barbera and Barbaresco to South America and the US. Baldi commented, “Piedmont is surrounded by alps, has diurnal temperature swings as part of its microclimate, and volcanic soil making this part of Italy perfect to grow Nebbiolo fruit that Barolo and Barbaresco is made from.” In 1956, Prunotto sold the company to brothers Beppe and Tino Colla. In 1961, with a quest to differentiate their wines, the Collas identified well-known vineyards of excellence to begin single vineyard vinification to produce the finest crus. The 600 year old Antinori winemaking family partnered with Prunotto in 1989 to assist in distribution and in 1994 purchased Prunotto upholding the benchmark of the finest quality wines. 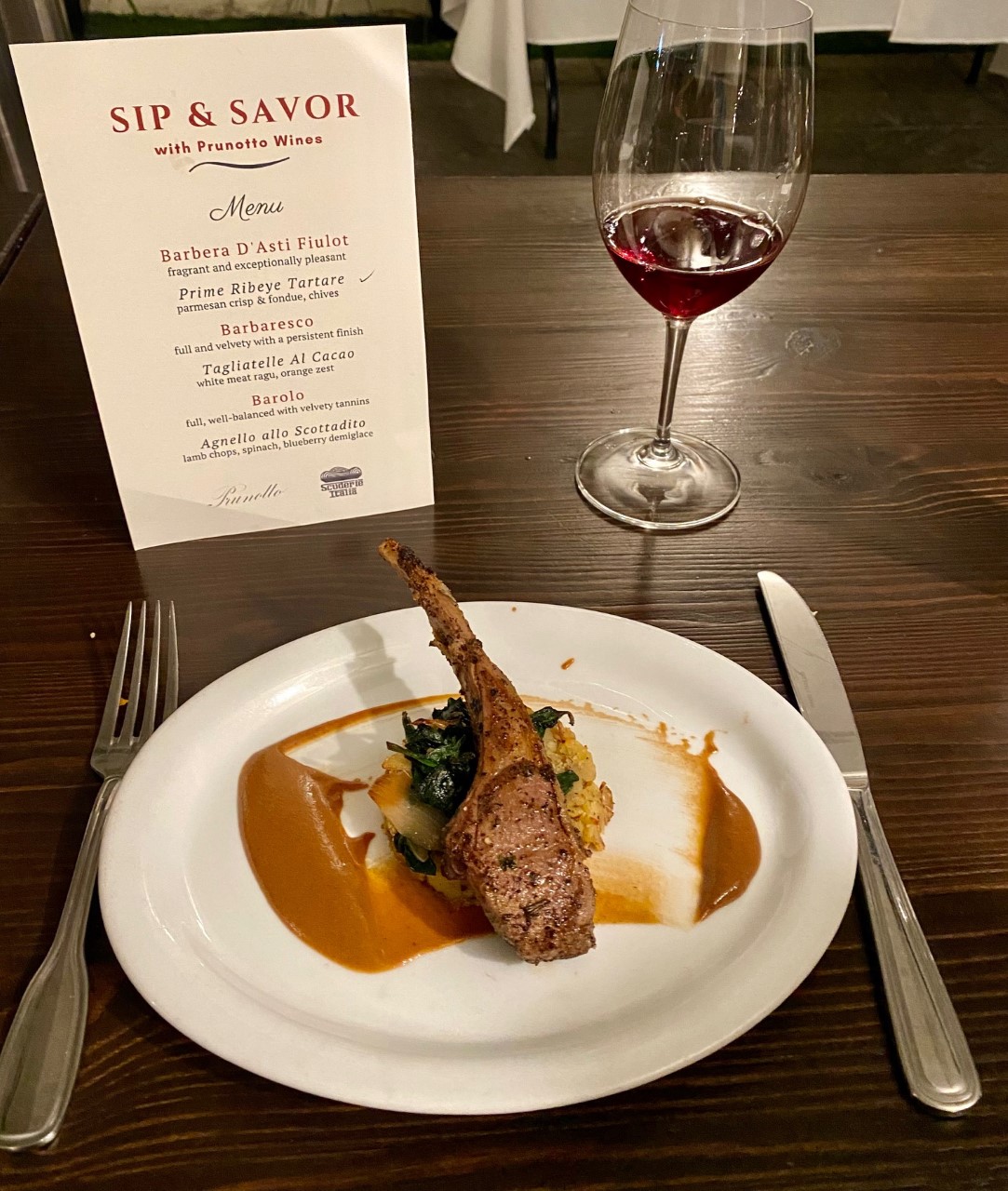 Another bonus was that Marco Maestoso has joined Scuderie Italia as their executive chef under the leadership of Proprietor Leonardo Landini. Maestoso is a multi talented chef who some might remember had his own restaurant, Maestoso, in Hillcrest. It was great to see Maestoso now at Scuderie. The event started with Prime Ribeye Tartare and a cheese fondue paired with Barbera D’Asti Fiulot. Baldi shared, “The Barbera is an easy drinking wine with acidity, cherry fruit, and brightness, perfect for pizza and pasta.” I agree Baldi was spot on with the tasting notes. I would also add that the Barbera nicely complemented the tartare as well. Next, Maestoso served Tagliatelle Al Cacao, that’s right, cocoa pasta alongside white ragu made with milk hence ‘white’ ragu. The milk helps break down the meat. The pasta was served with the bolder Barbaresco, compared to Barbera. Baldi noted, “The Barbaresco is a symphonic blend of perfume, body, and tannins.” I loved this pairing that was in perfect harmony with cocoa based fresh pasta and ragu. The third course featured Agnello allo Scottadito – lamb chop on the shank with roasted potatoes, spinach and a bone marrow/blueberry demiglace served with a 2017 Barolo that was even bolder than the Barbaresco. The Barolo sported floral overtones on the nose with red and spicy notes that was perfect for the richness of the lamb and demiglace. A fun fact – Scottadito means ‘burn your finger.’ Guests were encouraged to eat the chop, holding it by their fingers, in traditional style. Maestoso prepared the bone marrow base of the demiglace for 3 days and enhanced with blueberries. Frank and I look forward to returning to Scuderie soon to further explore Landini’s Pacific Beach gem with Maestoso’s creativity. More details at scuderieitalia.com.

After dinner Baldi and Di Silvio spoiled Frank and me with tastings from the next tier up Hystorical Areas wines. Specifically, they poured a 2015 Bric Turot Barbaresco and 2016 Bussia Barolo. The Bric Turot was named for the shape of the vineyard’s “bricco” summit and is how it received its name. It had several influencing factors that include specific clonal selection and aging in different sized barrels creating intense garnet color, cinnamon and clove perfume, and long lasting ripe fruit flavor on the palate. The Bussia also had several factors, most notably the mild 2016 summer creating long hangtime resulting in mid-October harvesting as well as the south facing exposure of the vineyard resulting in an intense fruit forward palate with soft and silky tannins. The event was a great reminder on how good Nebbiolo from Piedmont is!
See prunotto.it/en.

San Diego’s largest urban winery, Carruth Cellars, is expanding its popular wine tours. The first of two new tours is the “Coast to County” tour in collaboration with Orfila Vineyards and Winery. Guests start at Carruth’s Solana Beach Tasting Room and then take a scenic ride via Del Dios Highway to Orfila in Escondido and back to Carruth Solana Beach. Tours are 12 to 4PM. The $99 per person ticket includes wine flights, cheese, and charcuterie, and a wine educator to guide your trip. Carruth is also offering Custom Wine Tours. Choose 2 to 4 wineries (or breweries to visit) and Carruth will handle the rest. Pricing is custom per request. These are in addition to Carruth’s original “Coastal Wine Tour” that explores Carruth’s Carlsbad Village, Solana Beach, and Little Italy locations with wine, cheese, light dinner, transportation and tour guide/wine educator, 12 to 5:30pm, starting & ending at their Carlsbad Tasting Room. Pricing is $138 per person. Details for all of these at carruthcellars.com.